It also isn’t surprising that when strands begin to fall at an alarming rate, women get concerned—frustrated even. Are they going bald? Will their hair ever grow back again? To answer these questions is to focus on two terms: hair shedding and hair loss.

Because the features of hair shedding and hair loss are similar, many women often use the terms interchangeably. But there are key differences.

1. Shedding Is Normal to a Certain Extent

Everyone with hair—women, especially—loses their luscious locks daily. You may even lose as many as one hundred, although the most common count is forty. In fact, some may fall without your knowing it.

This is because hair strands are designed to break and fall in the first place. Your hair goes through different major phases. The anagen stage refers to its active growth, where it can lengthen to about six inches a year. If you’re an Asian, you may be blessed with an inch more.

Then, it proceeds to a resting phase, where the hair stops growing but instead plants itself properly into its roots. But the body is supposed to make new hair, so to give way for the new ones, the old strands must go.

It becomes abnormal when you shed hair more frequently or in higher volumes. For example, you can already remove clumps of it from your scalp.

There are many possible causes of female hair loss, and we’re going to tackle some of them later. One of these is the length of each of the phases of hair growth.

As mentioned, hair goes through many stages, including the resting phase. Sometimes, for some reason, this period lasts way longer than it should. In other cases, it stops there.

Thus, you will still lose hair, but there are no new strands that come out of the roots or the follicles. Instead, they will leave you with bald spots.

But this also means that hair loss is not the same as shedding, because in the latter, your hair will still grow back. You’re just losing a lot of strands than you like. 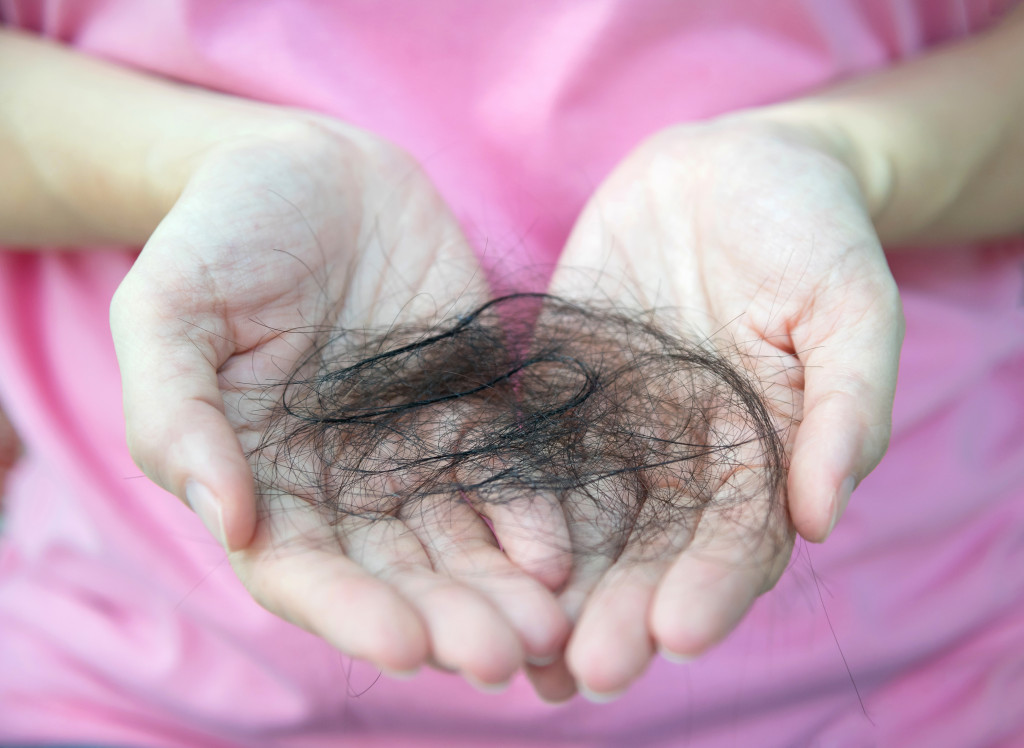 Some experts posit that genetics may play a vital role in hair loss for both men and women. And it’s possible that many genes may contribute to the problem. Genes, after all, can determine proteins that support hair growth, mutations that may affect the conditions of the scalp or the follicles, and even the length of the phases.

Note, though, that the link between genetics and baldness or hair loss is stronger when it comes to men. In one study involving twins, genetics accounted for over 75% of male-pattern baldness.

Moreover, the way men and women lose their hair varies. Males often begin to lose their strands at the front, which creates a receding hairline, and then moves on to the back. Females, on the other hand, can lose theirs in different parts of the head, although it usually begins in the parting line.

But There’s a Factor That Can Tie Both

This factor is hormones. Studies have shown that women’s hair loss often occurs among those who are already in their menopause. Shedding, meanwhile, is common among mothers who have just given birth.

One of the controlling hormones is androgen. This hormone, such as testosterone, is responsible for giving men their primary characteristics, such as facial hair.

However, women also have them for a variety of reasons. Androgens prevent bone loss (as women are more prone to osteoporosis) and promote high sexual drive. The body also converts a part of androgens into one of the two primary female hormones called estrogen.

When it comes to hair, androgens help regulate the formation and condition of the follicles, from where the strands come out.

Women don’t need a lot of androgens. Otherwise, they’ll end up growing lots of hair. But when the levels also decline, it may result in either shedding or loss or both. Usually, this happens during menopause where the quantities of hormones produced naturally drop.

Losing copious amounts of hair can be frightening. The good news is women now have many options to manage and treat the problem. Besides medications, they may already undergo hair transplantation if it’s already severe.

Moreover, if the reason is an underlying condition, treating the root cause can end hair loss and shedding once and for all.